Science depends on theory which organizes observable facts of nature into a single frame of reference to predict more facts. Such a science of human behavior does not yet exist. 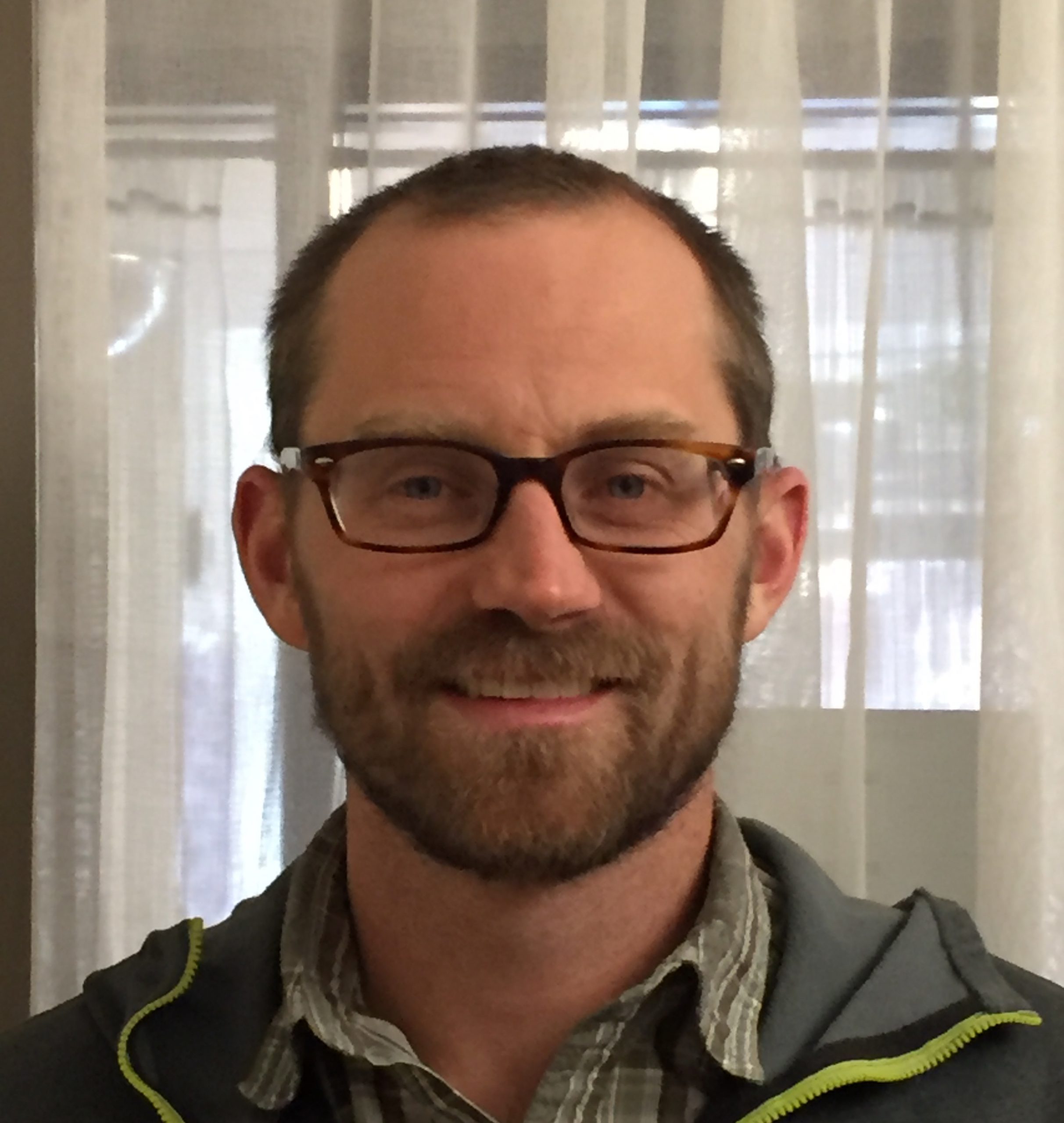 Family Diagram is one step in a long-term vision for a viable science of human behavior. A viable science of human behavior would be one that contains an integrative theory that can organize all factual observations into a single frame of reference that predicts behavior. Such a science does not yet exist. Bowen theory is one effort to develop such an integrative, predictive theory.

A science of human behavior requires predictive models based on a theory which describes human behavior. Predictive models require quantitative data to be organized systematically. Conventional psychological models rely on self-report about ideas rooted in subjectivity. Therefore, psychological ideas tend to be based more on what people say they do rather than what they actually do. Quantitative data is then simulated by correlating subjective categories in the subjective data, and so predictive power remains low. Contrary to common practice, correlation explains little on its own about what is occurring. An accepted science of human behavior requires quantitative models based on what people actually do, not what they say they do.

Most “theories” about human behavior have more to do with changing behaviors than simply describing and predicting them. Any theory that organizes an accepted science must exist separately from efforts to apply the theory. There are “theories” for creating a certain professional culture, or “theories” for converting negative feelings into positive feelings. These “theories” are not scientific if they cannot produce testable predictions prior to actually taking action. If physics were a science like psychology is a science, it would be like only being able to answer a question about where a ballistic missile will land by first shooting the missile. Such a physics would not be scientific. This is how a science of human behavior does not currently exist.

If physics were a science like psychology is a science, it would be like only being able to answer a question about where a ballistic missile will land by first shooting the missile. Such a physics would not be scientific. This is how a science of human behavior does not currently exist.

The result was a theory that proposes that human behavior is not substantially predictable at the level of the individual, but at the level of the human group. In other words, trying to predict an individual human’s behavior without observing them in the group is like trying to predict the movement of a flower without observing the wind. It proposes one thing: that a person’s behavior is far more predictable in the human group with the highest biological interdependence: the family.

For decades, a family diagram has made it possible for one person to record simple facts about a family’s response to stress. Often such a diagram could be used to communicate these facts to another person. Much of the information in the diagram is factual, such as biological relations, birth dates, moves, cutoffs, etc. Some symbols are theoretical interpretations of the facts, such as when used to indicate a basic pattern such as conflict, distance, projection, etc. 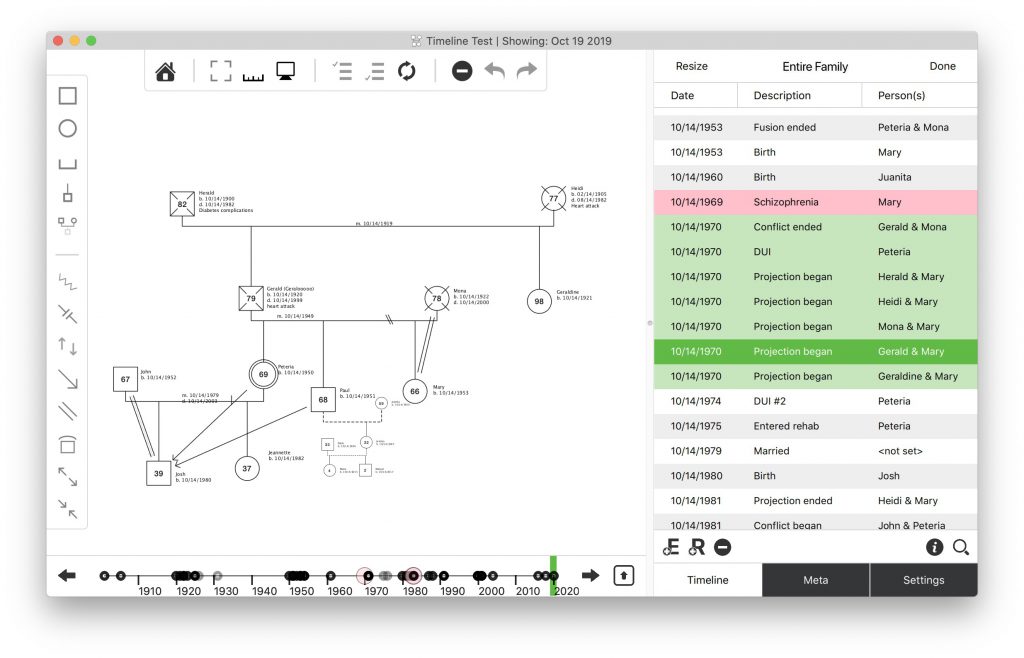 Moving to an integrative and quantitative science of human behavior requires refining the family diagram concept to use quantitative data. The winding and looping road to such a goal is illustrated in the following infographic: 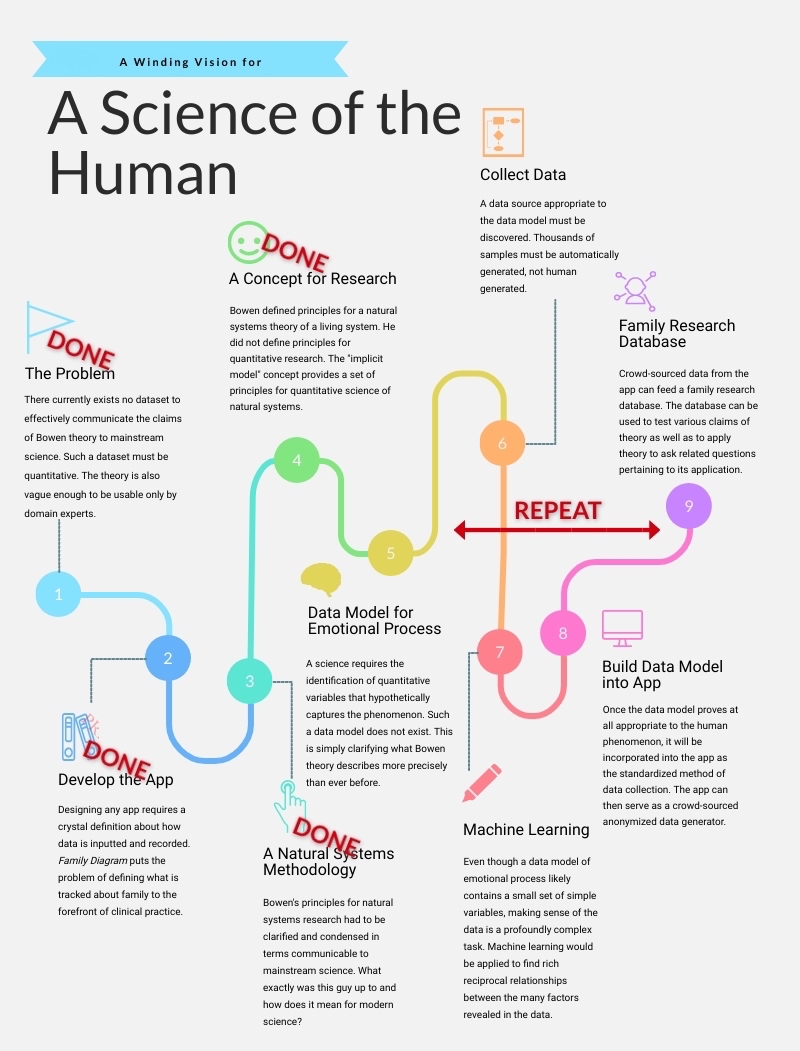 In the longest term, data from many families using Family Diagram would be aggregated into a database of family functioning that could put Bowen theory to the test. Bowen observed that systems coaches who challenge their assumptions by collecting and organizing facts about the families that they see tend to be more effective. Family Diagram is designed to simultaneously aid the systems coach in their professional work while pushing the theoretical envelope essential for a science of human behavior.

The stages marked “DONE” are covered in the following materials on this site:

Though some are marked “DONE”, each stage is of course repeatedly refined as time goes on. The more data is identified and then gathered, the more the later stages become solid and the earlier stages become even more solid. A stage is truly “DONE” when it is so useful that it is practically forgotten even though it is used every day, like the concept of gravity.

Family Diagram Toward a future for behavioral science Get Started https://youtu.be/PYoyL9FvP7M Family Diagram allows you to visualize a family system for use in family or

Technical Support Requests If you are having trouble using Family Diagram, please consult the User Manual and the Official Family Diagram Video Tutorial. If you